The Duke and Duchess of Sussex, Meghan Markle, and Prince Harry, announced earlier this year that they would be stepping down from their royal duties and obligations. Their retreat from life in the royal spotlight came as a shock to many. Next, came the question – how will they support themselves without the Queen of England financially backing them?

It came as no shock that Meghan Markle and Prince Harry would use their star power to build a brand and harness it to amass serious wealth. They’re global figures that command attention in some of the largest markets, such as the U.S. and U.K.  Branding experts estimate their star power is worth hundreds of millions if not billions of dollars. Their UK Trademark application for “Sussex Royal” reveals a window into their plans. They filed classifications for: campaigning, charitable fundraising, education, social services, printed matter, and clothing. The couple also had plans for goods and services ranging from paid speaking engagements to merchandising, and licensing. Leveraging their trademarks and brand could have provided them with substantial income to finance their new life.

Unfortunately, Harry and Meghan did not follow a comprehensive Trademark filing strategy that we recommend to our clients. It’s always crucial to file before you make a major announcement. Six new trademark applications were filed in the U.S. Patent and Trademark Office on the same day as their January 8th, 2020 announcement. Trademarks for “Sussex Royal” were also filed in Canada where they intended to live at one point in time and the U.K.

Meghan and Harry also received a notice of threatened opposition from Dr Benjamin Worcester from Victoria, Australia. This extended the opposition period, delaying the process of receiving an official trademark registration by one month, and several others filed notices of threatened opposition. While an official opposition was not received, the Sussex Royal Brand was further challenged by the Queen, who reportedly banned the use of the name if not for royal duties.

It came as a surprise when in a post on their website they reported Harry & Meghan would be abandoning their trademark registration for the words and logo “Sussex Royal.” In April 2020, they announced their brand Archewell and filed for trademark registration in the United States, the European Union, and the United Kingdom. Meghan and Harry received another trademark opposition in November last year from Martin Soriano, a small business owner from the Philippines. However, Soriano has yet to file a full opposition argument and has until March 25 2021 to do so.

Ultimately, it’s safe to say they’ll be financially okay in the long run, but it will be important for them to have a comprehensive trademark strategy. Trademarks are an asset that can provide you with a significant source of income when you leverage your intellectual property to increase profits. Failure to protect them can cost you.

At Zara Watson Law, we are an award winning, modern legal team providing a transparent trademark process for the digital entrepreneur. We provide peace of mind through white-glove support from start to finish. Click here to apply for a trademark today.

**This post is for informational purposes only, no attorney-client privilege has been formed. 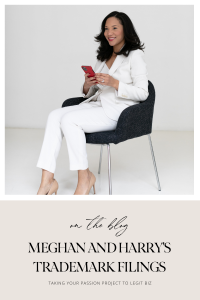