French fashion house Hermes owns several trademarks on its highly coveted Birkin handbag, which has become immediately recognizable due to its distinctive shape.

The Birkin trade dress is defined by “(a) a distinctive three lobed flap design with keyhole shaped notches to fit around the base of the handle, (b) a dimpled triangular profile, (c) a closure which consists of two thin, horizontal straps designed to fit over the flap, with metal plates at their end that fit over a circular turn lock, (d) a padlock which fits through the center eye of the turn lock and (e), typically, a key fob affixed to a leather strap, one end of which is affixed to the bag by wrapping around the base of one end of the handle.” 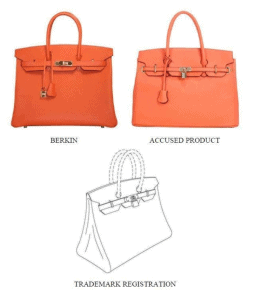 The Hermes Birkin is generally recognized by consumers due to its extensive coverage in the press as well as several television shows. This has made the handbag one of the sought-after bags today. The handbag’s enormous sales, considerable advertising and promotion, and media coverage have allowed the bag to acquire secondary meaning as well as famous trademark.

Birkin bags are some of the most expensive and exclusive bags in the world, ranging anywhere from $9,000 to half a million dollars. Since the shape of the bag was registered in 1993, Hermes has sued various companies for trade dress infringement for selling inexpensive duplicates of the bag, arguing that imitators are taking unfair advantage of the fame and reputation of the Birkin bag. This puts the brand in danger of losing their reputation for quality and commercial integrity. In 2012, Hermes was awarded $100 million in damages to be paid by 34 companies selling counterfeit duplicates of the Birkin bag and other Hermes products.

Your trademark is your company’s most valuable asset. With our help, protect your brand so that no one else can use your mark. Click here to schedule your free call with Zara!

**This information is for informational purposes only, no attorney-client privilege has been formed.